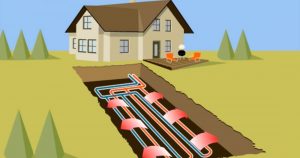 Temperature varies all throughout the year. Whether you are from the West side of the world enjoying snow in the winter or somewhere in the East savoring the heat of the sun, you are never certain that these temperatures will be permanent. Change is the only thing that’s constant, as they say.

For some people, they only care about the temperature above the ground. Little do they know that the temperature below ground stays fairly consistent all year regardless of the climate or season. The area just a few feet below the earth’s surface has a temperature that is roughly around 55°-70°F year-round, utterly different from the air temperature that varies greatly from day to night or when seasons change.

The sun — the earth’s direct source of energy, heat, and light — gives us the natural feeling of warmth during the day.  In the evenings, the moon reflects its light, which prevents pitch black skies. Almost 50% of the solar energy is absorbed in the ground, which allows the earth to remain at a consistent, balanced temperature just below its surface 12 months of the year.

During the summer, geothermal heating and cooling systems absorb heat from your home and transfers it to the underground loop where it is then absorbed by the cooler earth. The geothermal heat pump uses the cool water returning from the ground to create cool, dehumidified air conditioning for your home.

When you need cooling the most, the outside air is hottest. A traditional air source heat pump must work hard to force the heat from your home into the already heat saturated air. In contrast, a geothermal heat pump consumes less energy as it easily rejects heat into the cool earth, making geothermal cooling significantly more energy efficient.

In contrast to the summer where geothermal systems consume heat and transfer to the cooler earth, geothermal heating and cooling systems soak up the ground-stored heat via water that circulates under the ground.  The ground source heat pumps receive the heat and send to our homes to keep us comfortable during the cold season.

Gas furnaces that burn natural gas might be efficient in providing heat for your home but its efficiency rate is only around 98%. Geothermal systems, on the other hand, use significantly lesser amounts of energy from collecting heat from within the earth, thus achieving 400-600% efficiencies.

Geothermal heat pumps are not only the most comfortable way to heat and cool, they also have a number of other benefits.

As outdoor temps fall, a GHP draws from an underground reservoir of heat, concentrates it, and moves it to your home. Meanwhile, an ordinary heat pump collects heat from frigid winter air, making it least efficient when you need it to be the most. And unlike a furnace, geothermal units don’t create heat through combustion. They simply collect and move it.

During the winter, the air outside is really cold, thus making you want to heat up. Unfortunately, the cold air outside makes it hard for traditional air source heat pumps to work and function properly to extract the amount of heat from the cold air needed to provide you with the adequate amount of heat you desperately need. Meanwhile, geothermal heat pump systems consume less energy as it just absorbs the heat from the abundant supply stored within the earth, making geothermal heating one of the best options to ever exist.

To learn more about geothermal energy, check this video out: